The year 2019 concludes a decade of exceptional global heat, retreating ice and record sea levels driven by greenhouse gases from human activities. Average temperatures for the five-year (2015-2019) and ten-year (2010-2019) periods are almost certain to be the highest on record. 2019 is on course to be the second or third warmest year on record, according to the World Meteorological Organization. 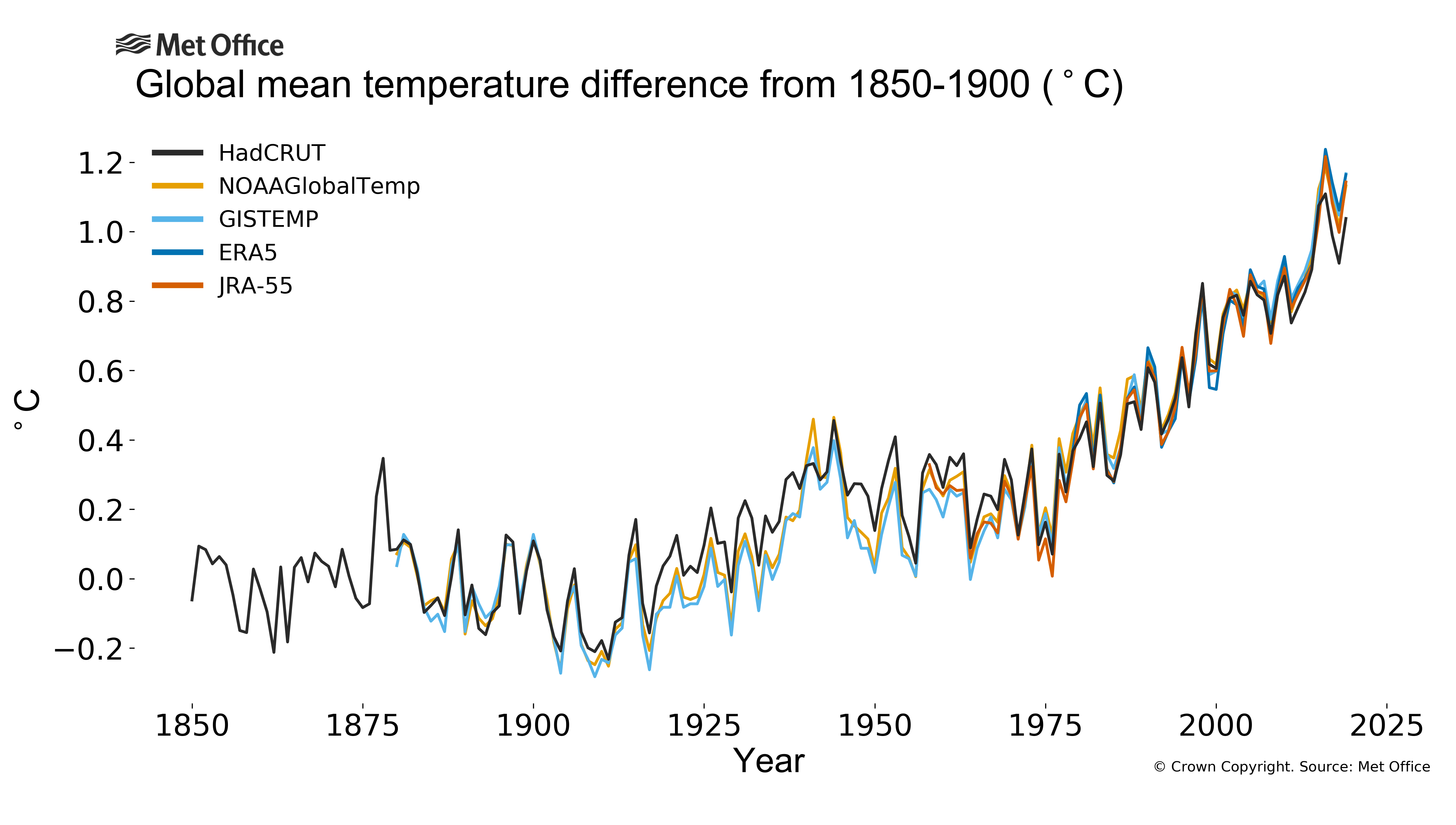 The WMO provisional statement on the State of the Global Climate, says that the global average temperature in 2019 (January to October) was about 1.1 degrees Celsius above the pre-industrial period.

Concentrations of carbon dioxide in the atmosphere hit a record level of 407.8 parts per million in 2018 and continued to rise in 2019. CO2 lasts in the atmosphere for centuries and the ocean for even longer, thus locking in climate change.

Sea level rise has accelerated since the start of satellite measurements in 1993 because of the melting of ice sheets in Greenland and Antarctica, according to the report.

The ocean, which acts as a buffer by absorbing heat and carbon dioxide, is paying a heavy price. Ocean heat is at record levels and there have been widespread marine heatwaves. Sea water is 26 percent more acidic than at the start of the industrial era. Vital marine ecosystems are being degraded.

The daily Arctic sea-ice extent minimum in September 2019 was the second lowest in the satellite record and October has seen further record low extents. In Antarctica, 2019 saw record low ice extents in some months.

“If we do not take urgent climate action now, then we are heading for a temperature increase of more than 3°C by the end of the century, with ever more harmful impacts on human wellbeing,” said WMO Secretary-General Petteri Taalas. “We are nowhere near on track to meet the Paris Agreement target.”

“On a day-to-day basis, the impacts of climate change play out through extreme and “abnormal” weather. And, once again in 2019, weather and climate related risks hit hard. Heatwaves and floods which used to be “once in a century” events are becoming more regular occurrences. Countries ranging from the Bahamas to Japan to Mozambique suffered the effect of devastating  tropical cyclones. Wildfires swept through the Arctic and Australia,” said Mr Taalas.

“One of the main impacts of climate change is more erratic rainfall patterns. This poses a threat to crop yields and, combined with population increase, will mean considerable food security challenges for vulnerable countries in the future,” he said.

The report devotes an extensive section to weather and climate impacts on human health, food security, migration, ecosystems and marine life. This is based on input from a wide variety of United Nations partners (listed in notes to editors).

Extreme heat conditions are taking an increasing toll on human health and health systems with greater impacts where there are aging populations, urbanization, urban heat island effects, and health inequities.  In 2018, a record 220 million more heatwave exposures by vulnerable persons over the age of 65 occurred, compared with the average for the baseline of 1986-2005.

Climate variability and extreme weather events are among the key drivers of the recent rise in global hunger and one of the leading causes of severe crises. After a decade of steady decline, hunger is on the rise again – over 820 million people suffered from hunger in 2018.  Among 33 countries affected by food crises in 2018, climate variability and weather extremes a compounding driver together with economic shocks and conflict in 26 countries and the leading driver in 12 of the 26.

More than 10 million new internal displacements were recorded between January and June 2019, 7 million being triggered by hazard events such as Cyclone Idai in southeast Africa, Cyclone Fani in south Asia, Hurricane Dorian in the Caribbean, flooding in Iran, the Philippines and Ethiopia, generating acute humanitarian and protection needs.

The provisional State of the Climate report provides an authoritative source of information for the U.N. climate change negotiations, known as CoP25, which take place in Madrid from 2 to 13 December. It complements the reports of the Intergovernmental Panel on Climate Change.

The final Statement on the State of the Climate with complete 2019 data will be published in March 2020. 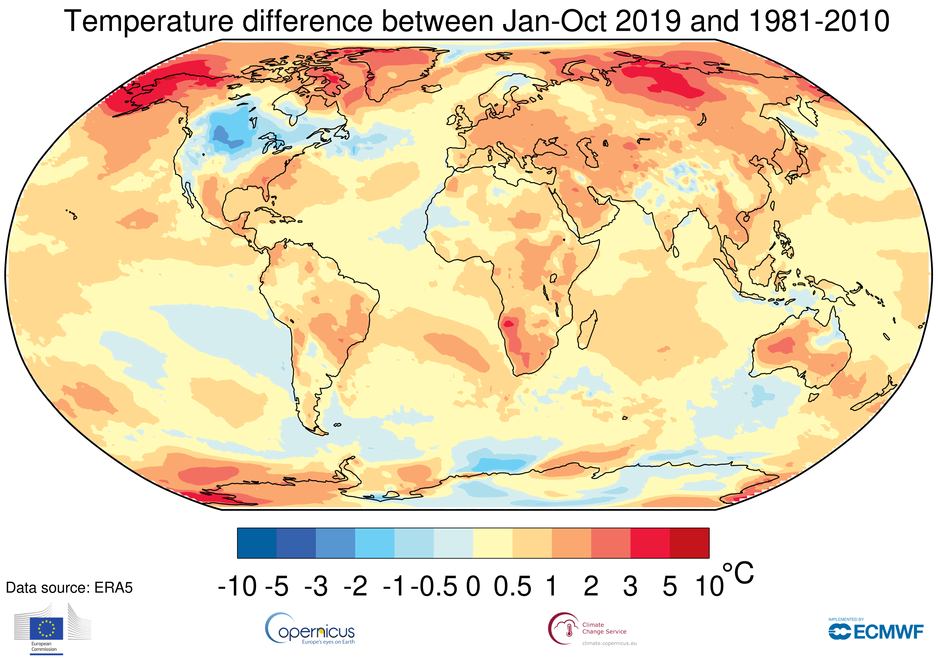 2019 is expected to be the second or third warmest year on record. 2016, which began with an exceptionally strong El Niño, remains the warmest year.

Global average figures for 2019 will not be available until late 2020, but real-time data from a number of specific locations indicate that CO2 levels continued to rise in 2019.

Sea level has increased throughout the satellite altimetery record, but the rate has increased over that time, due partly to melting of ice sheets on Greenland and Antarctica. In October 2019, the global mean sea level reached its highest value since the beginning of the high-precision altimetry record (January 1993).

More than 90% of the excess energy accumulating in the climate system as a result of increased concentrations of greenhouse gases goes into the ocean. In 2019, ocean heat content in the upper 700m (in a series starting in the 1950s) and upper 2000m (in a series starting in 2005) continued at record or near-record levels, with the average for the year so far exceeding the previous record highs set in 2018.

In the decade 2009-2018, the ocean absorbed around 22% of the annual emissions of CO2, which helps to attenuate climate change. However, increasing atmospheric CO2 concentrations affect the chemistry of the ocean.

Ocean observations have shown a decrease in the average global surface ocean pH at a rate of 0.017–0.027 pH units per decade since the late 1980s, as reported in the IPCC Special Report on the Ocean and Cryosphere in a Changing Climate, which is equivalent to an increase in acidity of 26% since the beginning of the industrial revolution.

The continued long term decline of Arctic Sea Ice was confirmed in 2019. The September monthly average extent (usually the lowest of the year) was the third lowest on record with the daily minimum extent tied for second lowest

Until 2016, Antarctic sea ice extent had shown a small long-term increase. In late 2016 this was interrupted by a sudden drop in extent to extreme values. Since then, Antarctic sea-ice extent has remained at relatively low levels.

Total ice Mass Balance (TMB) for the Greenland Ice Sheet gives a net ice loss for September 2018 to August 2019 of 329 Gigatonnes (Gt). To put this into context, data from the Gravity Recovery and Climate Experiment (GRACE) satellites tell us that Greenland lost about 260 Gt of ice per year over the period 2002-2016, with a maximum of 458 Gt in 2011/12.

The Central USA, Northern Canada, Northern Russia and Southwest Asia received abnormally high precipitation. The 12-month rainfall averaged over the contiguous United States for the period for July 2018 to June 2019 (962 mm) was the highest on record.

The onset and withdrawal of the Indian Monsoon were delayed, causing a large precipitation deficit in June but an excess of precipitation in the following months.

Very wet conditions affected parts of South America in January. There was major flooding in northern Argentina, Uruguay and southern Brazil, with losses in Argentina and Uruguay estimated at US$2.5 billion.

The Islamic Republic of Iran was badly affected by flooding in late March and early April. Major flooding affected many hitherto drought-affected parts of east Africa in October and early November.

Drought affected many parts of southeast Asia and the southwest Pacific in 2019, associated in many cases with the strong positive phase of the Indian Ocean Dipole. Exceptionally dry conditions prevailed from mid-year onwards in Indonesia and neighbouring countries, as well as parts of the Mekong basin further north. Long-term drought conditions which had affected many parts of inland eastern Australia in 2017 and 2018 expanded and intensified in 2019. Averaged over Australia as a whole, January-October was the driest since 1902.

Dry conditions affected many parts of Central America. It was substantially drier than normal in Honduras, Guatemala, Nicaragua and El Salvador, until heavy rains in October. Central Chile also had an exceptionally dry year, with rainfall for the year to 20 November at Santiago only 82 mm, less than 25% of the long-term average.

Australia had an exceptionally hot summer. The mean summer temperature was the highest on record by almost 1°C, and January was Australia’s hottest month on record. The heat was most notable for its persistence but there were also significant individual extremes, including 46.6°C at Adelaide on 24 January, the city’s highest temperature on record

It was an above-average fire year in several high-latitude regions, including Siberia (Russian Federation) and Alaska (US), with fire activity occurring in some parts of the Arctic where it was previously extremely rare.

The severe drought in Indonesia and neighbouring countries led to the most significant fire season since 2015. The number of reported fires in Brazil’s Amazonia region was only slightly above the 10-year average, but total fire activity in South America was the highest since 2010, with Bolivia and Venezuela among the countries with particularly active fire years.

Tropical Cyclone Idai made landfall in Mozambique on 15 March as one of the strongest known on the east coast of Africa, resulting in many casualties and widespread devastation. Idai contributed to the complete destruction of close to 780 000 ha of crops in Malawi, Mozambique, and Zimbabwe, further undermining a precarious food security situation in the region. The cyclone also resulted in at least 50 905 displaced persons in Zimbabwe, 53 237 in southern Malawi and 77 019 in Mozambique.

One of the year’s most intense tropical cyclones was Dorian, which made landfall with category 5 intensity in the Bahamas. The destruction was worsened as it was exceptionally slow-moving and remained near-stationary for about 24 hours.

In 2019, record-setting high temperatures from Australia, India, Japan, and Europe impacted health and well-being. In Japan, a major heat wave event affected the country in late July to early August 2019 resulting in over 100 deaths and an additional 18 000 hospitalizations. Europe experienced two significant heat waves in the summer of 2019. In June, a heatwave affecting southwestern to central Europe resulted in a number of deaths in Spain and France. The most significant heat wave was in late July, affecting much of central and western Europe. In the Netherlands, the heatwave was associated with 2 964 deaths, nearly 400 more deaths than during an average summer week

Changes in climatic conditions since 1950 are making it easier for the Aedes mosquito species to transmit dengue virus, increasing the risk of the occurrence of disease. In parallel, the global incidence of dengue has grown dramatically in recent decades, and about half of the world population is now at risk of infection. In 2019, the world has experienced a large increase in dengue cases, compared with the same time period in 2018.

In Southern Africa, the start of the seasonal rains was delayed and there were extensive dry periods. Regional cereal output is forecasted to be about 8 percent below the five-year average with 12.5 million people in the region expected to experience severe food insecurity up to March 2020, an increase of more than 10 percent from the previous year.

Food security has been deteriorating in several areas of Ethiopia, Somalia, Kenya and Uganda due to a poor long/Gu rainy season. Overall, about 12.3 million people are food insecure in the Horn of Africa region. Between October and November 2019, Somalia was further affected by intense flooding.

Associated with the  worst flooding in a decade affecting some parts of Afghanistan in March 2019, 13.5 million people are food insecure in the country, with 22 out of 34 provinces still recovering from severe drought conditions faced in 2018.

More than 10 million new internal displacements were recorded between January and June 2019, 7 million being triggered by disasters such as Cyclone Idai in Southeast Africa, Cyclone Fani in South Asia, Hurricane Dorian in the Caribbean, flooding in Iran, the Philippines and Ethiopia, associated with acute humanitarian and protection needs.

Floods were the most commonly cited natural hazard contributing to displacement, followed by storms and droughts. Asia and the Pacific remains the world’s most disaster displacement-prone region due to both sudden and slow-onset disasters.

The number of new displacements associated with weather extremes could more than triple to around 22 million by the end of 2019.