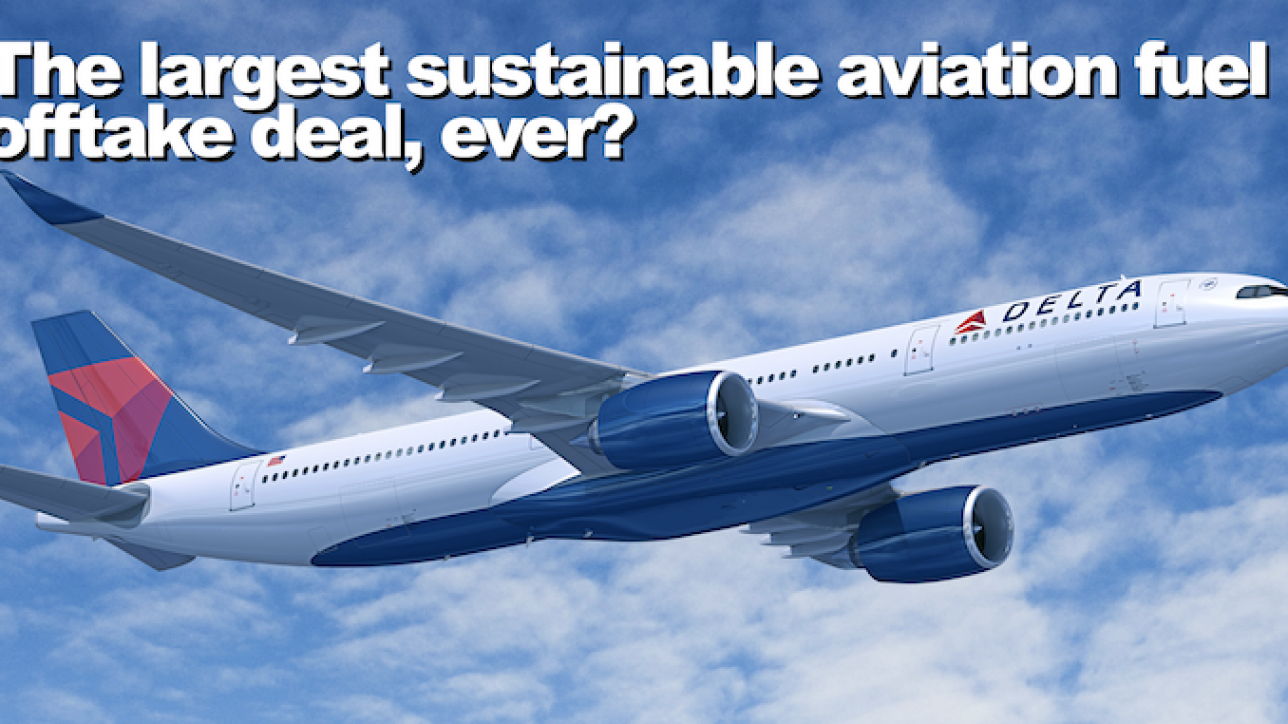 From Washington state and from Georgia news arrives that Delta and entered into one of the largest airline offtake agreements of its kind to purchase sustainable aviation fuel from NWABF.

Yep, NWABF, which sounds an awful lot like Porky Pig trying to pronounce “Robert” but actually is Northwest Advanced Bio-Fuels. More on that, shortly.

But let’s reflect on what’s been an amazing season for the airline. First the $2 million investment for an ongoing feasibility study with NWABF, then a monster offtake contract with Gevo for 2022-23. Now this.

How big an offtake contract?

Unofficially, we’ve heard the deal described as “the largest volume offtake contract in the world ever for any airline.”  The Gevo contract was for 10 million gallons per year of advanced renewable biofuels. So, consider this, for now, to be bigger.

The feasibility study, announced in October 2019 and currently underway, is expected to determine the potential for a facility in Washington state that could supply sustainable aviation fuel for Delta operations in Seattle, Portland, San Francisco and Los Angeles by mid-2020. The sustainable aviation fuel that may be produced from the facility, which would reduce lifecycle emissions up to 80 percent compared to that of conventional jet fuel.

The NWABF offtake agreement would anticipate fuel production by the end of 2024 while the advanced planning study will conclude later this year.

This complements the airline’s recent offtake agreement with Gevo for biofuel production in Minnesota, expected to be available between 2022-2023.

We reported on length on the Gevo-Delta deal in “Gevo’s Delta sustainable aviation fuels deal — Holy SAF, Batman, it really worth a billion bucks?”

Dang, who is that Riedy Guy?

Once again skating to where the puck will be and not where it is, our Digest Seattle spies have signaled that that Mark Riedy guy and his Kilpatrick team were once again in the mix. Reminds me of that scene in Butch Cassidy and the Sundance Kid where Butch turns to Sundance after finding a SuperPosse inexplicably hard on their heels, “Who are those guys?”.

Our ground team whispers that Kilpatrick were instrumental in the negotiation, drafting and got execution of the first two Delta Biojet Offtake Agreements — first for Gevo and now with the Northwest Advanced Biofuels LLC.

Since 2005, Delta has reduced its jet fuel consumption, leading to an 9 percent decrease in emissions as Delta works toward its long-term goal of reducing emissions. Delta is also investing in new, more fuel-efficient aircraft to optimize the use of jet fuel.

In July of 2019, Delta flew the first of 20 carbon-neutral new aircraft delivery flights from the Airbus final assembly line in Mobile, Ala., utilizing sustainable aviation fuel and carbon offsets in coordination with Airbus and Air BP.

“This focused study and long-term agreement will support Delta’s goals to lower our carbon footprint aggressively. Investing in developing multiple sources of sustainable aviation fuel is one of the many ways we are looking to address climate change,” said Alison Lathrop, Delta’s Managing Director – Global Environment, Sustainability and Compliance. “Working alongside Northwest Advanced Bio-Fuels to produce and utilize sustainable aviation fuel could serve as an industry-best-practice-model for future endeavors.”

“We are very excited to deepen our work with Delta Air Lines and both of our world class teams to improve sustainability,” said Dave Smoot, Head of Northwest Advanced Bio-Fuels. “Our fuel project and agreement will bolster Delta as a key leader in the renewable sustainable aviation fuel industry.”

Less on the story

Usually at this point we direct you to “more on the story,” but this being Delta Airlines, they’re crossing the t in Delta and dotting the i in Airlines before we get the full scoop — for now, you can chew the morsels here.