Oberon Fuels, SHV Energy partner up to accelerate renewable DME: is this tech a carbon removal machine of great importance? 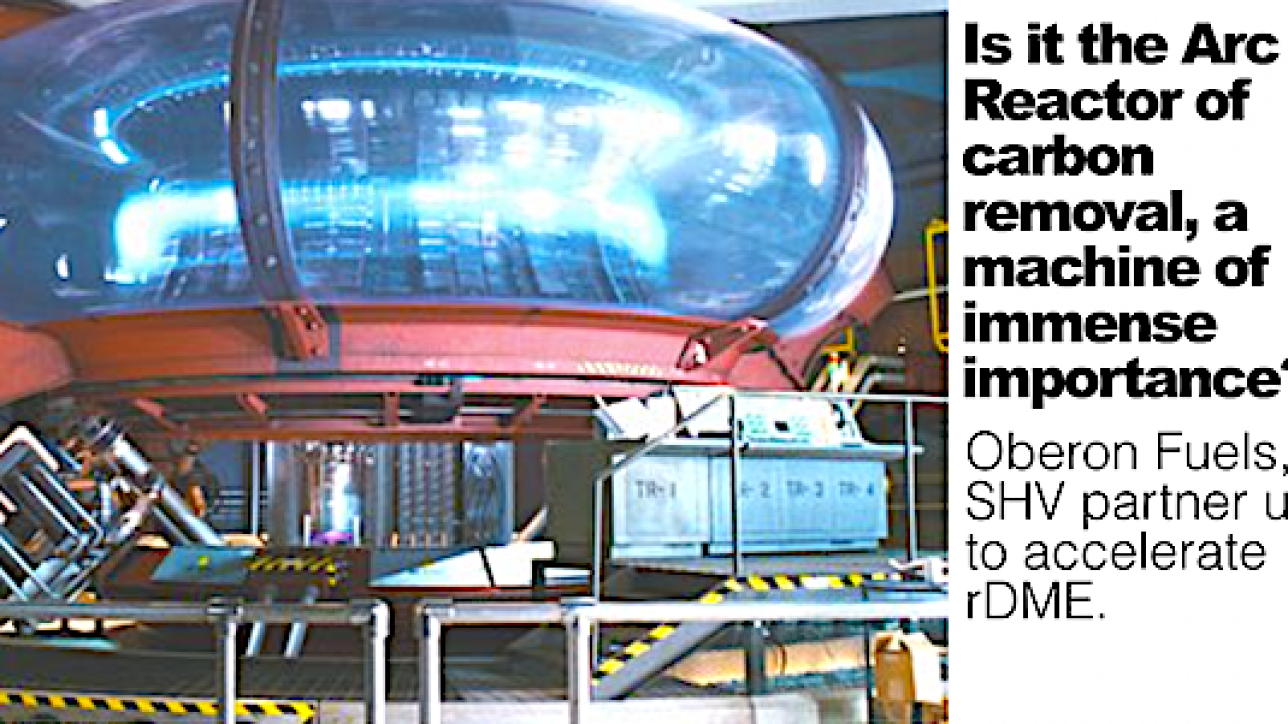 In California, Oberon Fuels and SHV Energy are partnering to accelerate the use of renewable DME to reduce the carbon footprint of transportation fuel.  For Oberon’s path to scale, the partnership will include funding to augment a recent $2.9M grant from the California Energy Commission grant to further develop DME fueling infrastructure and vehicle development. Also, SHV Energy technical resources will help test the use of rDME blended with propane, and SHV Energy’s extensive global distribution network will facilitate greater use of rDME in numerous energy applications worldwide.

I forgot what DME is – remind me

Under ambient conditions, rDME is a gas but can be stored as a liquid under moderate pressure, which makes DME ideal for blending with propane.  DME’s easy handling properties also make fueling and infrastructure relatively simple and inexpensive.  DME is approved as a renewable fuel under the U.S. Environmental Protection Agency’s Renewable Fuels Standard, making it eligible for RINs credits when made from biogas by the Oberon process.

The Big Attraction: The Carbon Score

Oberon’s focused on waste as a feedstock, and the carbon scoring is so extremely carbon-negative that what we have here is a planet-saving, carbon absorption machine in its own right.

With only a 20 percent blend of rDME, propane’s carbon intensity (CI) value is reduced from 83 gCO2e/MJ to 11 gCO2e/MJ. California Air Resources Board (CARB) has estimated that dairy manure converted to DME by the Oberon process has a CI of -278 gCO2e/MJ compared to ultra-low-sulfur diesel which has a CI of 100 gCO2e/MJ.

That’s the most acronym dense read-out from a public agency, perhaps ever. So let’s frame that again, this time in one number:

If it were a temperature, you’d be on Neptune, and a carbon score of -278 is about as rare as a trip to the outer planets. Oberon’s technology is the Ironman Arc Reactor of carbon removal, a machine of immense potential, and even more so, because it’s a part of the here and now and not the Marvel Cinematic Universe.

How do they get a score like that? In essence, it’s a score built off the -150 score that’s handed out to renewable natural gas that utilizes dairy waste. The biogas there is a powerful greenhouse gas, and converting it away from a methane emission to a fuel is the first step in a big carbon reduction. In the case of DME, the process chews up even more methane, and that’s why it gets an even bigger carbon bump than straight RNG.

Over $30 million in private funding has been invested in Oberon Fuels since its founding in 2010. Additionally, the State of California in 2019 awarded Oberon a $2.9 million grant to upgrade its existing DME pilot facility to demonstration scale and facilitate the first production of rDME in the U.S., with a target production capacity of approximately 1.6 million gallons of DME per year.  Oberon sees this state-invested project as a key building block towards producing rDME statewide using California’s methane emissions.

Coming quite soon is a new feedstock, in this case a renewable methanol which is derived from a new process developed by a large Kraft Pulp milll operator, Alberta-Pacific Forest Industries, to isolate methanol from pulp residues. It’s well known that pulp streams have methanol in them — that’s why methanol is called wood alcohol — to date, no one’s been able to extract the methanol and isolate it from the abundant sulphur that is also found in pulp streams and causes that traditional strong odor at pulp mills.

Alberta-Pacific’s had a technical breakthrough, pulp mills could use a new customer set, and there are 144 Kraft Pulp mills in North America to supply towards this process.

More on the Oberon backstory here:

SHV is a major player, if you’re new to the world of propane, in the global supply of propane for transport, heating, cooking and a wide variety of industrial applications. Since signing an initial contract with Neste in 2016 for renewable propane, they’ve been notably active in the renewable fuels space. The problem in propane is that no one has made very much. “We have some very interesting technology in the pipeline, but that’s down the road,” SNH Energy’s Direcvtor of Biofuels, Rebecca Groen, told The Digest. “For doing something right now, DME is attractive. There are feedstocks available, the technology is available, and the product is not quite but almost drop in.”

And there’s the Oberon effect, as Groen told us.

“Oberon is extremely innovative, and they hit way above their weight in terms of the impact of legislation and in getting things moving. They’re a real pioneer in DME and we want to continue to be a pioneer, and they are a great partner in transport.”

It’s not a One World, One Problem situation

Yep, in China, EU and North America there’s drive from customers and from legislation. But for other countries — for example, India, Turkey and Brazil, the cost of energy remains the biggest issue with fuels such as propane, and the prevalent use of cooking, for example, emphasizes that it’s a slightly different user base than in, for example, the EU. A lot more customers in the consumer sector are highly exposed to economic conditions and sensitive to price.

Long term, think D20, shorter term we may see the same gallons of DME blended more widely, as a D5, to reduce the potential of price impact and also to take into account the smaller volumes that would be available in the early days of deployment. Two of the primary Oberon offerings

When will we learn more?

This partnership is aiming to build out a demonstration at scale of Oberon’s technology, and think 2020 and 2021 for that. There’s going to be a lot more action in the space — more demand-side partners, for sure. So watch this space. “By partnering with the world’s leading distributor of propane, we hope to further accelerate the use of rDME globally to help decarbonize the transportation sector and beyond,” said Ruben Martin, Chief Executive Officer of Oberon Fuels.

“Innovation is at the heart of SHV Energy. Building upon our pioneering work launching renewable propane in 2018, we are excited by the opportunity to convert renewable and waste feedstocks to rDME,” said Bram Gräber, Chief Executive Officer at SHV Energy.  “We believe rDME has significant potential to help us achieve our ambitions to be a leader in renewable energy, and we are looking forward to working with Oberon Fuels to bring this ultra-low carbon fuel to market.”

Reaction from the Rebeccas

“This collaboration is a testament to the power of the rDME molecule as an innovative solution to address emissions and climate change,” said Oberon president Rebecca Boudreaux. Asked about SHV, Boudreaux noted, “I love their ability to be bold, they are a family owned company with a very long history of success over 125 years, the leader in propane, and they have the ability to look long term and take bold steps. Their announcement to make the transition to 100 percent renewable is incredibly far-sighted.”

“rDME’s dual benefits – its ability to reduce the CI of propane, as well as its ease of interoperability with propane infrastructure  – make it an ideal option for the propane industry as it seeks to reduce the carbon footprint of an already clean, efficient option,” added SHV’s Rebecca Groen.