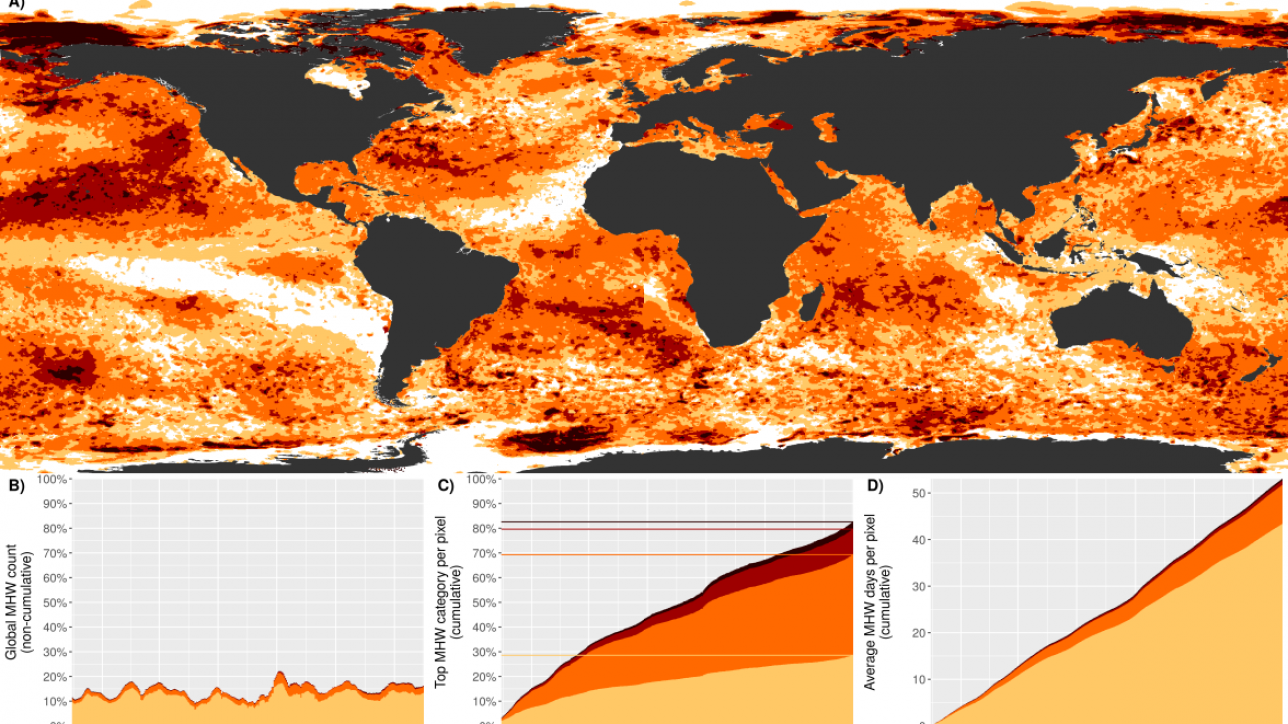 The tell-tale physical signs of climate change such as increasing land and ocean heat, accelerating sea level rise and melting ice are highlighted in a new report compiled by the World Meteorological Organization and an extensive network of partners. It documents impacts of weather and climate events on socio-economic development, human health, migration and displacement, food security and land and marine ecosystems.

The WMO Statement on the State of the Global Climate in 2019 includes input from national meteorological and hydrological services, leading international experts, scientific institutions and United Nations agencies. The flagship report provides authoritative information for policy makers on the need for Climate Action.

The report confirms information in a provisional statement issued at the UN Climate Change Conference in December that 2019 was the second warmest year in the instrumental record. 2015-2019 are the five warmest years on record, and 2010-2019 the warmest decade on record. Since the 1980s, each successive decade has been warmer than any preceding decade since 1850.

2019 ended with a global average temperature of 1.1°C above estimated pre-industrial levels, second only to the record set in 2016, when a very strong El Niño event contributed to an increased global mean temperature atop the overall warming trend.

“We are currently way off track to meeting either the 1.5°C or 2°C targets that the Paris Agreement calls for,” said United Nations Secretary-General Antonio Guterres in a foreword.

“This report outlines the latest science and illustrates the urgency for far-reaching climate action.  It brings together data from across the fields of climate science and lists the potential future impacts of climate change – from health and economic consequences to decreased food security and increased displacement,” he said.

“Given that greenhouse gas levels continue to increase, the warming will continue. A recent decadal forecast indicates that a new annual global temperature record is likely in the next five years. It is a matter of time,” said WMO Secretary-General Taalas.

“We just had the warmest January on record. Winter was unseasonably mild in many parts of the northern hemisphere. Smoke and pollutants from damaging fires in Australia circumnavigated the globe, causing a spike in CO2 emissions. Reported record temperatures in Antarctica were accompanied by large-scale ice melt and the fracturing of a glacier which will have repercussions for sea level rise,” said Mr Taalas.

“Temperature is one indicator of ongoing climate change. Changes in the global distribution of rainfall have had a major impact on several countries. Sea levels are rising at an increasing pace, largely due to the thermal expansion of sea water as well as melting of the largest glaciers, like in Greenland and Antarctica. This is exposing coastal areas and islands to a greater risk of flooding and the submersion of low-lying areas,” said Mr Taalas. 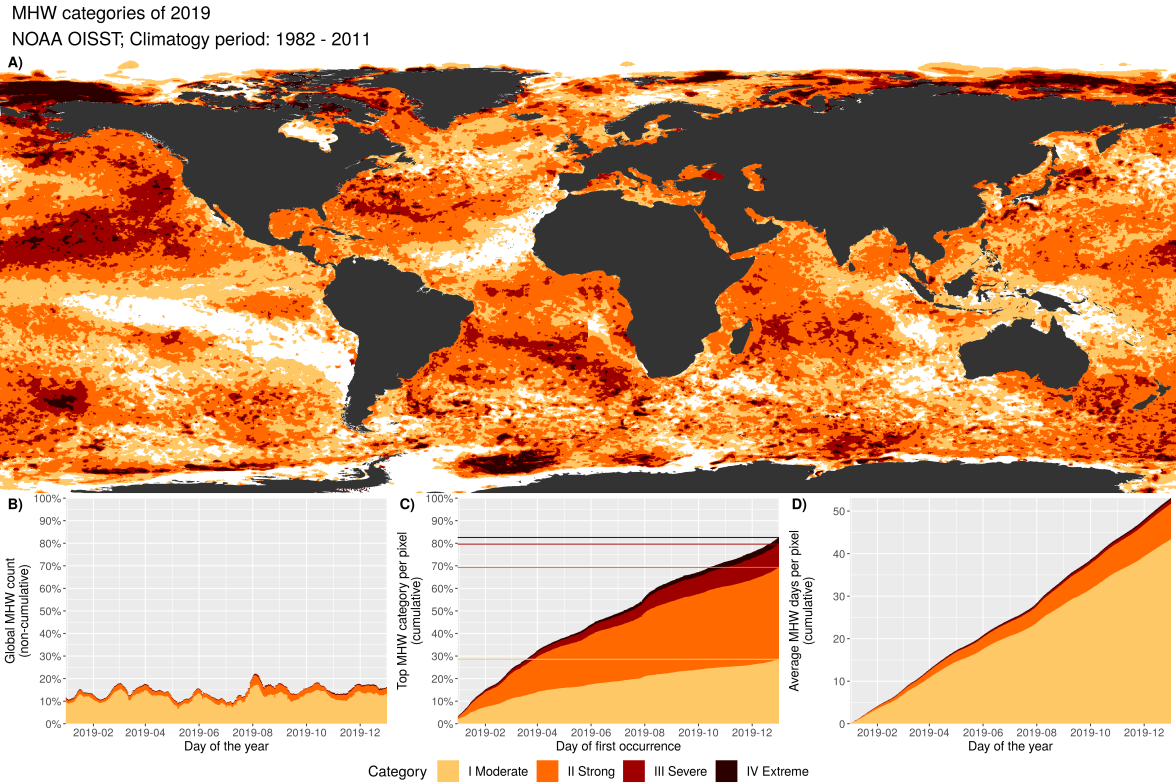 More than 90% of the excess energy accumulating in the climate system as a result of increased concentrations of greenhouse gases goes into the ocean. In 2019, ocean heat content down to a depth of 2 kilometres exceeded the previous record highs set in 2018.

Ocean warming has widespread impacts on the climate system and contributes more than 30% of sea level rise through thermal expansion of sea water. It is altering ocean currents and indirectly altering storm tracks and melting floating ice shelves. Together with ocean acidification and deoxygenation, ocean warming can lead to dramatic changes in marine ecosystems.

Ocean Acidification: In the decade 2009-2018, the ocean absorbed around 23% of annual CO2 emissions, cushioning the impacts of climate change but increasing ocean acidity. The change of pH reduces the ability of marine organisms such as mussels, crustacean and corals to calcify, affecting marine life, growth and reproduction.

Ocean Deoxygenation: both observations and models indicate that oxygen is declining in the open and coastal oceans, including estuaries and semi-enclosed seas. Since the middle of the last century, there has been an estimated 1%–2% decrease (77 billion–145 billion tons) in the global ocean oxygen inventory.

Marine Ecosystems: Deoxygenation alongside ocean warming and acidification is now seen as a major threat to ocean ecosystems and the wellbeing of people that depend on them. Coral reefs are projected to decline to 10%-30% of former cover at 1.5°C warming, and to less than 1% at 2°C warming.

Sea level has risen throughout the satellite altimetery record (since 1993), but the rate has increased over that time, mainly due to melting of ice sheets on Greenland and Antarctica. In 2019, the global mean sea level reached its highest value on the record. 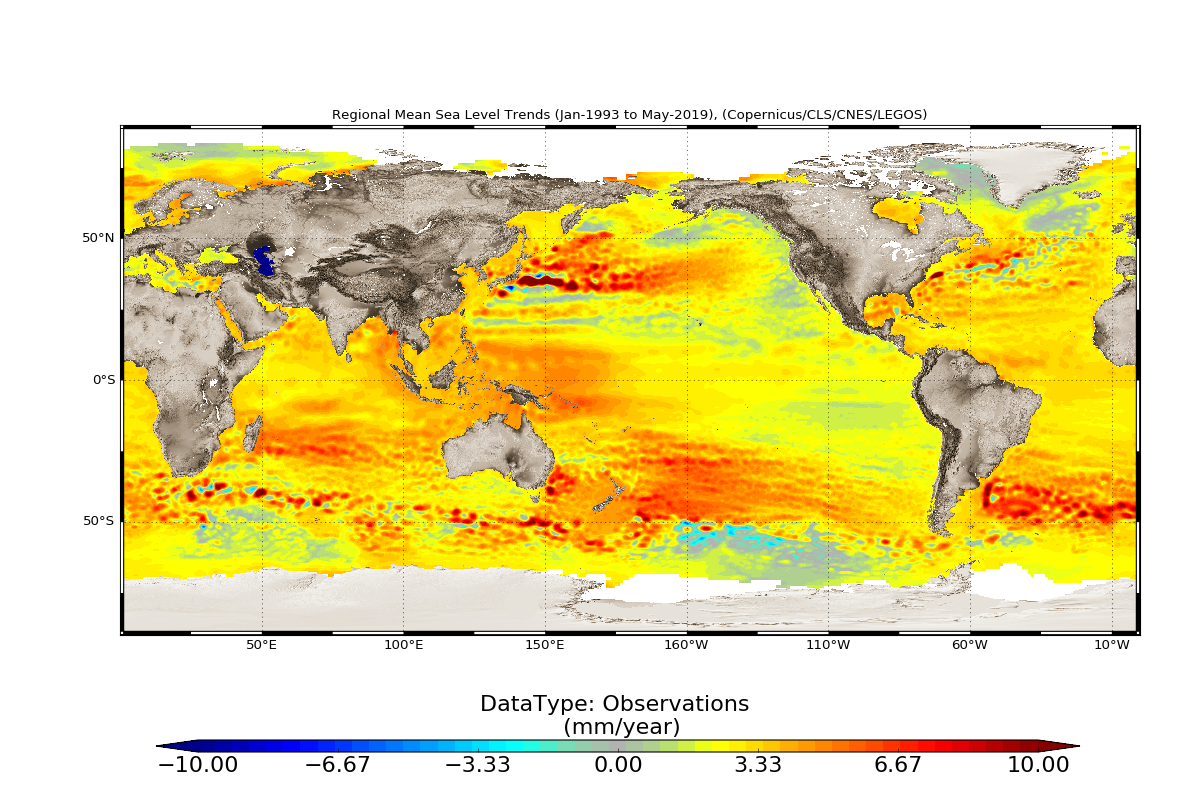 Ice: The continued long-term decline of Arctic sea ice was confirmed in 2019. The September monthly average extent (usually the lowest of the year) was the third lowest on record with the daily minimum extent tied for second lowest.

Until 2016, Antarctic sea ice extent had shown a small long-term increase. In late 2016 this was interrupted by a sudden drop in extent to extreme low values. Since then, Antarctic sea-ice extent has remained at relatively low levels.

The report devotes an extensive section to weather and climate impacts on human health, food security, migration, ecosystems and marine life. This is based on input from a wide variety of United Nations partners.  (See in Editor’s note for full list)

In 2019, record-setting high temperatures from Australia, India, Japan, and Europe negatively affected health and well-being. In Japan, a major heat wave event resulted in over 100 deaths and an additional 18 000 hospitalizations. In France over 20 000 emergency room were recorded for heat-related illnesses between June and mid-September and during two major summer heatwaves, there were a total of 1 462 excess deaths in the affected regions. 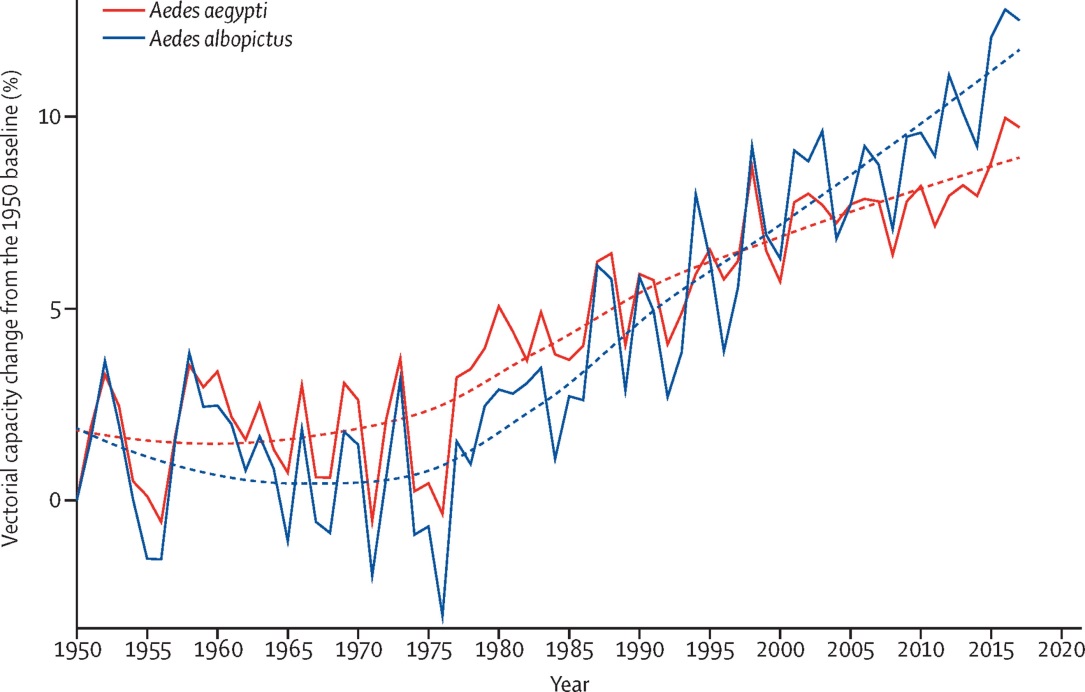 Changes in climatic conditions since 1950 are making it easier for the Aedes mosquito species to transmit dengue virus, increasing the risk of the occurrence of disease. In parallel, the global incidence of dengue has grown dramatically in recent decades, and about half of the world population is now at risk of infection. In 2019, the world experienced a large increase in dengue cases.

Climate variability and extreme weather events are among the key drivers of the recent rise in global hunger and one of the leading causes of severe crises. After a decade of steady decline, hunger is on the rise again – over 820 million people suffered from hunger in 2018.  Among 33 countries affected by food crises in 2018, climate variability and weather extremes a compounding driver together with economic shocks and conflict in 26 countries and the leading driver in 12 of the 26.  In light of this, the global community faces an enormous challenge to meet the Zero Hunger target of the 2030 Agenda for Sustainable Development.

The food security situation deteriorated markedly in 2019 in some countries of the Greater Horn of Africa due to climate extremes, displacement, conflict and violence. By late 2019, about 22.2 million people, (6.7 million in Ethiopia, 3.1 million in Kenya, 2.1 million in Somalia, 4.5 million in South Sudan, 5.8 million in the Sudan) were estimated to be severely food insecure, only slightly lower than during the severe and prolonged drought in 2016-17.

There was exceptional dryness in March and much of April followed by unusually heavy rainfall and floods in October-December.   The unusually heavy precipitation in late 2019 was also a factor in the severe desert locust outbreak in the Horn of Africa region – the worst in over 25 years, and the most serious in 70 years for Kenya. This is expected to spread further by June 2020 in a severe threat to food security. 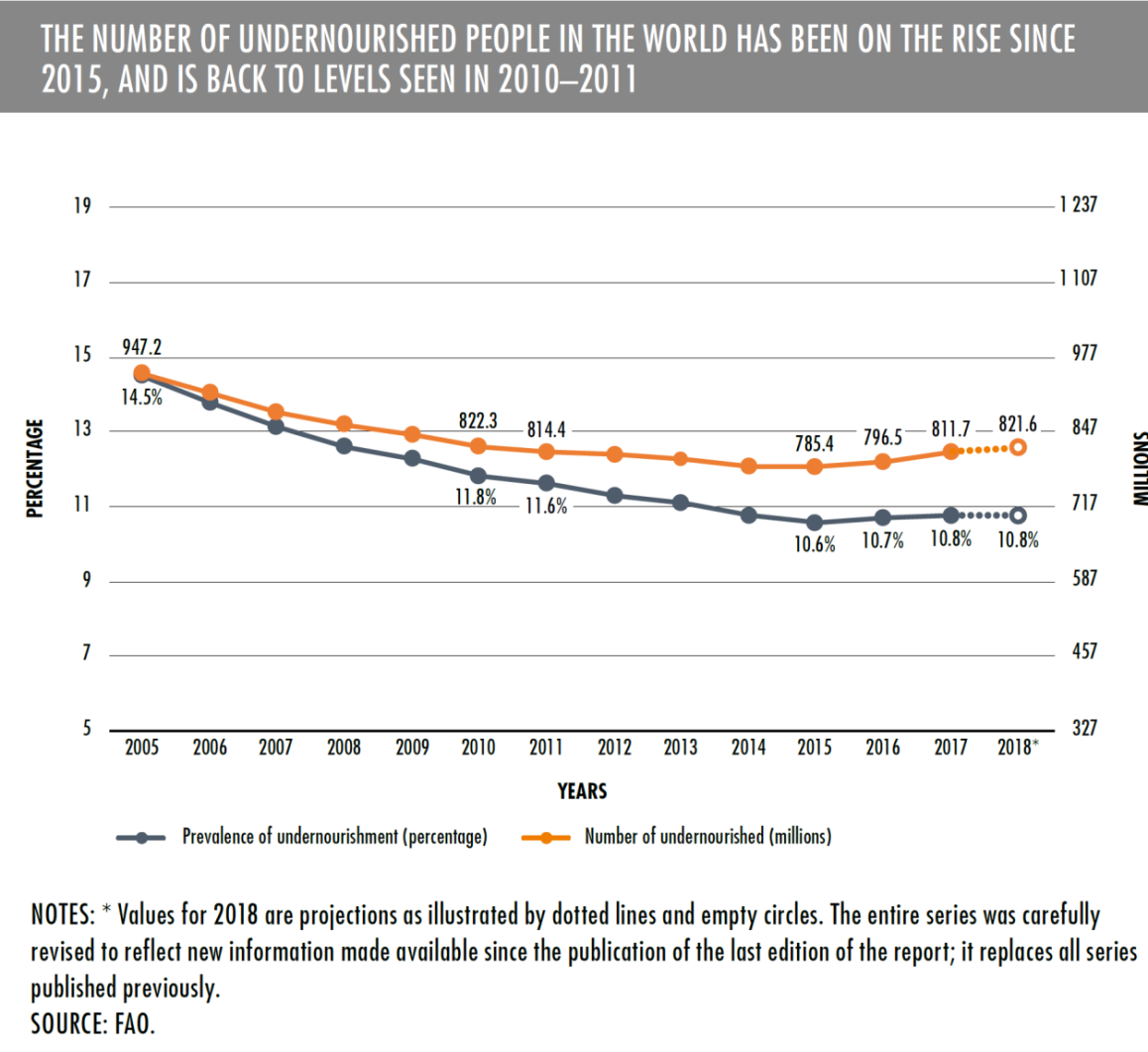 More than 6.7 million new internal disaster displacements were recorded between January and June 2019, triggered by hydrometeorological events such as Cyclone Idai in Southeast Africa, Cyclone Fani in South Asia, Hurricane Dorian in the Caribbean, and flooding in Iran, the Philippines and Ethiopia. This number was forecast to reach close to 22 million in 2019, up from 17.2 million in 2018. Of all natural hazards, floods and storms contributed most to displacement.

More than 2 200 lives were reported to have been lost in various flooding episodes in India, Nepal, Bangladesh and Myanmar during the monsoon season, which started late but finished with rainfall totals above the long-term average.

The 12-month rainfall averaged over the contiguous United States for the period for July 2018 to June 2019 (962 mm) was the highest on record. Total economic losses from flooding in the United States in 2019 were estimated at US$20 billion.

Very wet conditions affected parts of South America in January. There was major flooding in northern Argentina, Uruguay and southern Brazil, with losses in Argentina and Uruguay estimated at US$2.5 billion.

The Islamic Republic of Iran was badly affected by flooding in late March and early April. Major flooding affected many hitherto drought-affected parts of east Africa in October and early November.

Drought affected many parts of southeast Asia and Australia, which had its driest year on record, influenced by the strong positive phase of the Indian Ocean Dipole.

It was an above-average fire year in several high-latitude regions, including Siberia (Russian Federation) and Alaska (US), with fire activity occurring in some parts of the Arctic where it was previously extremely rare.

The severe drought in Indonesia and neighbouring countries led to the most significant fire season since 2015. The number of reported fires in Brazil’s Amazonia region was only slightly above the 10-year average, but total fire activity in South America was the highest since 2010, with Bolivia and Venezuela among the countries with particularly active fire years.

Australia experienced an exceptionally prolonged and severe fire season in the later part of 2019 with repeated major outbreaks which continued into January 2020. As of early 2020, 33 deaths had been reported and over 2000 properties had been lost, while a total of about 7 million hectares had been burnt in New South Wales and Victoria.

Daily total wildfire CO2 emissions generally followed the 2003-2018 average, according to the Copernicus Atmospheric Monitoring Service ECMWF Global Fire Assimilation System dataset. The largest increases above the 17-year mean in July, August, September and the end of December corresponding to the peak activity of wildfires in the Arctic/Siberia, Indonesia and Australia respectively. 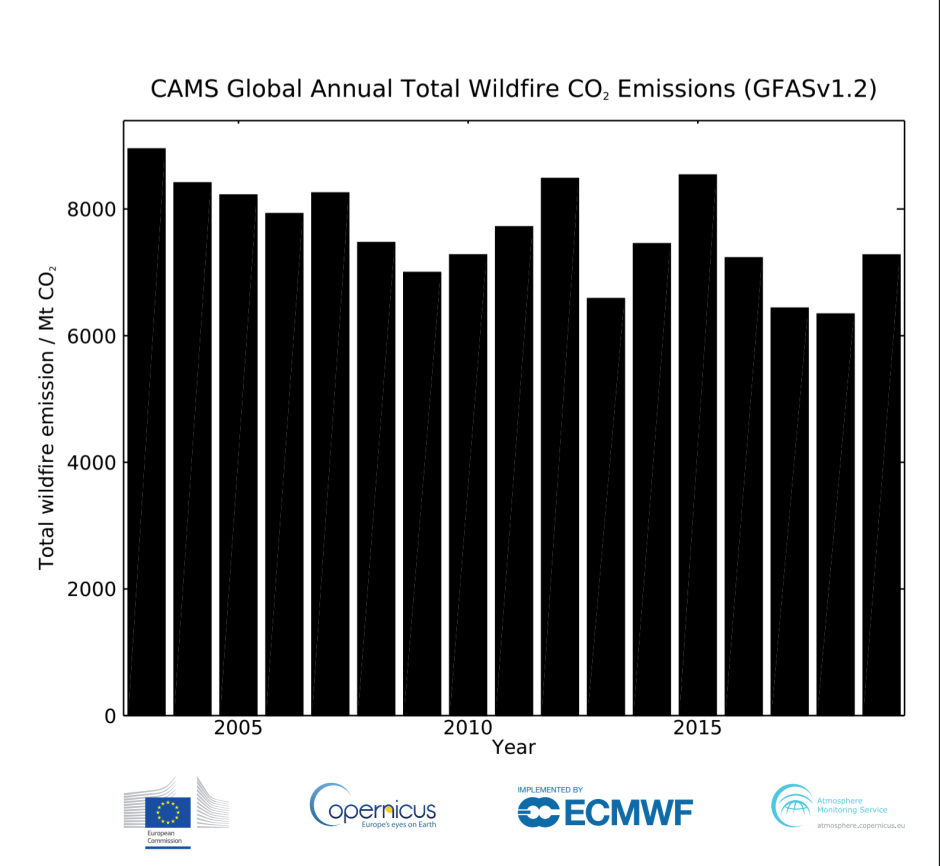 Tropical Cyclone Idai made landfall in Mozambique on 15 March as one of the strongest known on the east coast of Africa, resulting in many casualties and widespread devastation. Idai contributed to the complete destruction of close to 780 000 ha of crops in Malawi, Mozambique, and Zimbabwe, further undermining a precarious food security situation in the region. The cyclone also resulted in at least 50 905 displaced persons in Zimbabwe, 53 237 in southern Malawi and 77 019 in Mozambique.

One of the year’s most intense tropical cyclones was Dorian, which made landfall with category 5 intensity in the Bahamas. The destruction was worsened as it was exceptionally slow-moving and remained near-stationary for about 24 hours.